“To see somebody else struggling and to be able to lend a hand or lend an ear—that’s living a diaconal life.”

I wanted to be a twenty-year man more than anything in this world. However, you get battle scars as you go along. I do have all the aches and pains that everybody—ankles, knees, back, neck, shoulder. And I ran hard. Eventually, your legs get tired and you don’t want to run anymore. And your kids are getting older, and your beard’s getting a little longer with grayer hair in it, and you’re—you don’t move as fast as you used to. And you see things from a different lens. After many years of being in the military and rough-and-tumble, I had packed away all the running that I was ever going to do. And it was time for something new.

A diaconal life is a life dedicated to service. Knowing that you’re not the most important thing. What you’re doing is not as great as you think it is. But to see somebody else struggling and to be able to lend a hand or lend an ear—I think that that’s living a diaconal life. Doing the things that we should all do naturally. Help your brother, help your neighbor. To me, that’s what diaconal living is.

Where I could most serve in my region is over in South Bend, they have a large homeless veteran population, and they go to—and I think it’s a meeting place for veterans, almost like a halfway house or a mission. They allow them to come in and sleep, and take showers, and help them with resumes and things of that nature. And that’s where I’m going to focus at the beginning and kind of see where that takes me.

This is a life of service. Being in the military, you’re serving somebody else. You’re serving something greater than yourself. This is just another transition. There’s a resurrection of that with this diaconal life, and that’s what I want to bring to veterans, and show them that there’s something more out there. You don’t have to struggle. You don’t have to feel alone. We’re still here, we’re just serving in a different capacity. 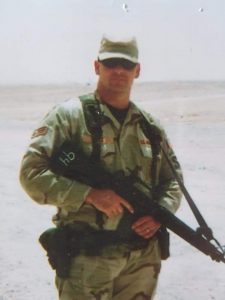 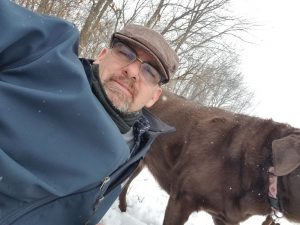 John with his dog